What’s that I hear? It’s the lovely strains of Humoresque on the violin! Edward, hello! Put down your bow and let’s hear about you now. The third oldest of my four grandparents is my mom’s father, Edward Ernest Cannaday. Edward was born in Peoria, Illinois on June 24, 1908, to Edward Cabell Cannaday and Martha Maria Tornedde. Edward’s middle name came from Martha’s German-born father, Ernst Tornedde. Martha’s brother (Edward’s uncle) was also named Ernest. Edward grew up in the family home on 711 Johnson Street in Peoria where his mother also lived for much of her childhood. (The four photos below were taken on Johnson Street, c. 1912-1915.) 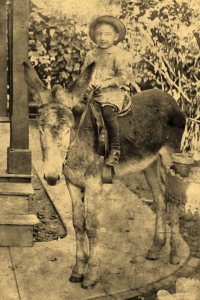 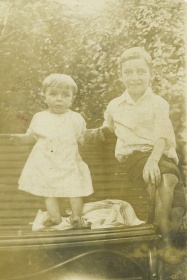 Grandpa Ed was the oldest of four children, all boys. The brother nearest in age to him, Paul, was born in 1915. Paul died in a tragic accident when he was 18 months old. Paul’s death deeply affected Edward for the rest of his life. Ed’s two youngest brothers, Frank and Robert, were born in 1917 and 1924, respectively. Ed’s father died in February 1930, when Ed was 21 years old.

Four months after his father’s death, Edward married Ruby Kathleen George in Joliet, Illinois, on June 21, 1930. Ed and Ruby had two girls, Sharon and Carol. When the girls were still at home, the family lived in the East Bluff area of Peoria. The house at 317 Frye Avenue was a family favorite.

After high school, Ed attended Bradley University. Ed then worked as a clerk and cashier at the Illinois Power & Light Company. In the early 1940s, he became a special agent for the U.S. Treasury Department. Edward had big dreams as an entrepreneur, and in 1955 he quit his job to open an A&W Root Beer stand in Knoxville, Tennessee. Sadly, Ed died on July 11, 1956, less than a year after opening the new business. He was 48 years old. Edward died before his daughters were married and he never met his six grandchildren. 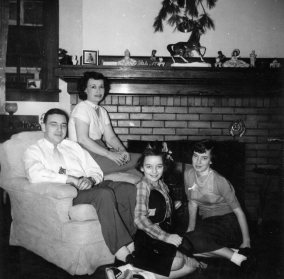 Grandpa Ed was sensitive, vulnerable, reticent, and oriented toward the past. He was a worrier by nature: “I eat well, I sleep well, I have nothing to worry about and it worries me.” And yet, Edward was also creative. He played violin in the Peoria Symphony Orchestra, and he and Ruby often danced at the Inglaterra Ballroom. He liked to dabble in the kitchen and one of his specialties was pizza, before most non-Italian people in middle class America even knew what pizza was. Edward was handsome and charming—oh, those dreamy eyes—and well-liked at the neighborhood tavern, the Wisconsin Tap. He had a subtle sense of humor. Edward encouraged his daughter Sharon’s love of horses by taking her to the local Bar X rodeos and eventually buying her a horse of her own, Flicka. When the opportunity arose to foster a lion cub from the Peoria Zoo, Edward surprised his girls by coming home with baby Monarch (against Ruby’s wishes!).

How I wish I had met Grandpa Ed! Do you have a story to share?