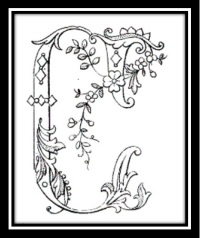 Esther Cooper was born August 26, 1856, in Lydbrook, Gloucestershire, England. Esther was the first child of Joseph Cooper and Esther Elliss, who had been married but a few months at the time of her birth. In a sad turn of events, Esther’s mother died eight days after Esther was born, from puerperal fever, sometimes called childbed fever. Esther was baptized the day before her mother died, in a private ceremony.

I imagine that extended family stepped forward to care for baby Esther in the days, weeks, and months after her mother died. Before Esther turned two Joseph remarried, and by the time of the 1861 England Census, the Cooper household consisted of Joseph and his second wife Fanny, Esther (4), plus two sons (one not yet 2 years old and the other, 5 months). Also living with the Coopers was 11-year-old Louisa Baker, described as a nursemaid. The Coopers were by no means wealthy and Louisa probably did not get paid for her services but received room and board in exchange for helping Fanny with her three young children. Over the next ten years, the Coopers would welcome four more children, the youngest who died in infancy. Esther seems to have been very much a part of the Cooper family unit, staying connected to her half-siblings all her life. Esther is not in the Cooper household in the 1871 census. I have not found her in the census records at all for that year; it is likely she was in domestic service, the lot in life for girls in the Forest of Dean in that place and time in history.

On September 7, 1877, when she was 21 years old, Esther married Richard Yemm in the Lydbrook Chapel. They moved to a cottage at Birch Marsh, near English Bicknor, where they would begin raising a family. Esther and Richard welcomed their first child, my great-grandmother Esther, in January 1879. (As a first-born daughter, I might have been named Esther, too, had not the youngest Esther in the line broken tradition by naming her oldest daughter Ruby!) Joe was born in 1881, followed by Steve in 1883, Florence in 1886, George in 1888, and Dollie in 1890. All six children were baptized at the English Bicknor parish chapel. Esther’s son Joe, in a sentimental poem, remembered his mother sitting in her favorite chair in front of the hearth, reading aloud to him and his siblings before evening prayer.

In 1894, little George died. He was just six years old. His death certificate describes his cause of death as “epilepsy, chronic diarrhea, and exhaustion,” and he had probably been sickly for some time (perhaps since birth). By the time of the 1901 census, the Yemms were living in a cottage near Trafalgar Colliery, where Richard and the two boys worked. Daughter Esther was living and working as a domestic in Gloucester. But, there had been an addition to the family—baby Godfrey Cooper, who was born on January 1, 1900. Godfrey was the son of Esther’s half-brother, James, whose wife had died soon after Godfrey was born. Given her own history, it surely must have felt right to Esther to take in little Godfrey. I suspect that she might have felt a special kinship with him, and apparently Godfrey filled a void that her whole family felt after the loss of George. Many years later, Esther and Florence would recount how much they all loved Godfrey and how much fun he brought to their household.

Photo taken at Upper Lydbrook (marked on map at right), looking north toward the Wye River valley. The photo of Esther below was probably taken from Worrall Hill (also marked on the map), looking toward the same valley.

The next several years brought great change for Esther. By the 1911 census, the Yemm household consisted of just Esther, Richard, and eleven-year-old Godfrey. They had moved to Worrall Hill in Lydbrook, the childhood home of Esther and Richard. Esther’s three oldest children had immigrated to America. Florence had moved to London to study nursing. Dollie was working as a nurse and domestic in Wales. And Esther had become a grandmother.

The only known photo of Esther Cooper Yemm, who looks so much like Florence! The inscription on the back, in the handwriting of Esther’s daughter Esther, reads “Mother with Tibby.” Esther would be pleased to know the cat-lover gene is still going strong.

In addition to the changes in her family life, the onset of WWI brought about a whole world of change for all of Britain. Florence, who had completed her nurse training, joined the war effort as a nurse and was stationed in Malta, Gallipoli, and Italy. During the war, Dollie traveled to America to visit her siblings. She was interviewed for a local newspaper and reported that she and her siblings heard often from their parents. Esther wrote, “Don’t worry about us. We have plenty to eat, but it is a sad time.” It was surely a great relief when Florence returned safely home to Worrall Hill after the war. However, two of Esther’s children had lost their spouses, not in the war, but in the Great Influenza Pandemic of 1918, which killed more people than WWI and WWII combined.

Soon after the death of his wife, Esther’s son Stephen returned to England for a visit. Despite the sad circumstance that brought him back, Esther must have been overjoyed to see her son. I imagine that she always held out hope of seeing her other children, too, but she would never again see Esther, Joe, or Dollie (who had married during her trip to America and settled near her brothers and sister).

“F M Yemm from E Yemm, June 18th, 1921” reads the quaintly formal inscription in this little prayer book, a gift from Esther to her daughter Florence soon after Richard’s death.

Richard died in 1921. He and Esther had been married for nearly 45 years at the time of his death. Florence, meanwhile, had moved back to London to take a position as a school nursing administrator. Godfrey had married and moved away. Esther stayed on at Worrall Hill until 1928, when she moved to London to live with Florence. After 72 years in the Forest of Dean, the move must have been quite an adjustment for her.

Esther’s most cherished belonging: the beautiful sampler that was hand-stitched by her mother, Esther Elliss, in October 1840, when she was just seven years old.

Esther died in London in 1933. She left a modest inheritance to Florence and what was surely her most precious possession, a beautiful sampler that had been hand-stitched by her mother—the mother she never knew—when she was just a girl herself. Today that sampler is one of my most prized possessions. The sampler has traveled across time and space (more than 175 years and 4,500 miles!), a tangible reminder of the tenuous threads that connect us, one generation to another. 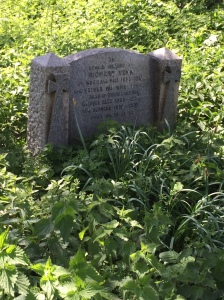 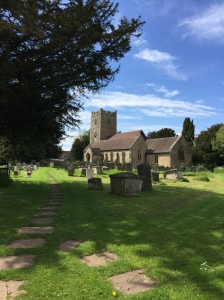 The English Bicknor church has been in existence since the 1500s. When I visited England in 2015 with my mom, aunt, and cousin, we enjoyed wandering through the old cemetery and looking at the fascinating stones and inscriptions. One of the most touching: “In memory of our mother, who fell asleep on …”

The Cooper chest tomb in the English Bicknor cemetery is inscribed on the top and all four sides with the names of seven family members and these poems, typical of Victorian gravestones:

Therefore be ye ready
For in such an hour
As ye think not
The son of man cometh.
The year rolls round and steals away
The breath that it first gave
What’er, we do where’er we be
We’re travelling to the grave.

~~~
Your voices are now silent, your hands are now cold,
Where your smiles and your welcomes oft met us of old.
We miss you and mourn you in silence unseen
and dwell on the memory of joys that have been.

And, finally, this sad verse for Esther’s stepmother, Fanny:

Her pain was great. Her end was peace.