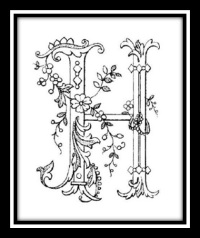 Emily J. Holmes was born around 1843 near Jacksonville, Morgan County, Illinois. She sometimes used the nickname Emma. Whether Emily or Emma, she seemed to consistently use her middle initial “J” throughout her life, but I’ve not found a single document to tell us what the “J” stands for! Emily’s parents were Palmer Holmes, born in North Stonington, Connecticut, and Fanny Tefft, born in New York. Palmer and Fanny emigrated to Illinois in the early 1820s, just a short time after Illinois attained statehood in 1818.

Emily first appeared in a public record, the 1850 U.S. Census, at the age of 7.  There were nine children in the Holmes household at that enumeration—four boys and five girls.  Six of Emily’s siblings were older and two were younger.  The census showed that Emily attended school during the year. The Holmes family lived near Diamond Grove, a settlement five miles southeast of Jacksonville. The Diamond Grove Baptist Church, established in 1823, was fundamental to the community. Emily’s maternal grandparents were founding members, and her uncle, Peris Holmes, was a long-time church Elder. The area was largely agricultural and her father was a farmer. 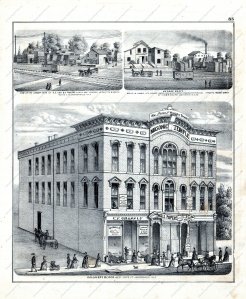 In the 1860 census, there were just three children left at home, 17-year-old Emily and her two younger brothers, Philip and Frances. In December of 1861, Emily’s mother died. I wonder if Emily became a mother figure to her younger brothers? Philip and Frances (when he was old enough) enlisted in the Army during the Civil War, as did Emily’s two older brothers, Marcus and Henry. All four survived the war, although Emily lost a brother-in-law in the Battle of Chickamauga, Georgia.

Andrew Myers reportedly passed through Jacksonville in 1863 or 1864 when his brother Hiram and family lived there (this, from Andrew’s deposition in Hiram’s Civil War pension file). Apparently, Andrew and Emily crossed paths—I wish I knew how they met! Did they have a courtship or were those niceties dispensed of? All we really know is they married in neighboring Menard County on July 26, 1865. The designation of “Miss” on the marriage license indicates that this was Emily’s first marriage. It is unknown if Andrew was married more than once. He was at least 30 years old at the time of his marriage to Emily. I wrote here about the possibility of a family left behind in Tennessee. 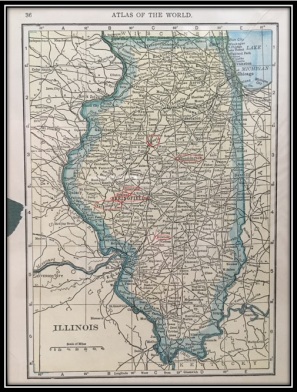 Emily lived here…and here…and here. The Myers family moved fairly frequently, not settling any one place for long until they reached Peoria. Click here for an enlarged view of this historic Illinois map.

Soon after their marriage, Emily and Andrew moved from Menard County to Montgomery County, where their first two children, Minnie (1866) and Henry (1867) were born. By 1870, the family of four was living in the community of Ashland, in Cass County, where son Albert (1869) was likely born. William (1874), was born in Sangamon County.  In 1880, the family was living in Bloomington, McLean County, Illinois.  No doubt the family’s frequent moves were to chase work for Andrew, who was a cooper by trade. Each successive move took the Myers family to increasingly industrial and more populated areas.

To my surprise, in August 1883 Emily filed for divorce. According to the pleadings, Andrew had deserted Emily two years earlier, on August 15, 1881. Andrew did not respond to the complaint. 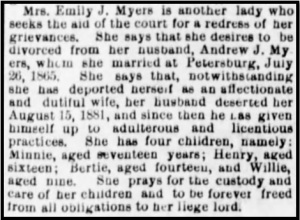 In mid-October 1883, Emily was granted a default divorce and given custody of the children, all four of whom were still minors. Divorce in that day was more common than I would have thought. After the Civil War, the divorce rate had begun to climb steadily, and by 1889, the U.S. had the highest divorce rate in the world. Nonetheless, the stigma of divorce was still felt by those involved, and women especially tried to avoid the label “divorced,” often calling themselves widowed even if they were not. 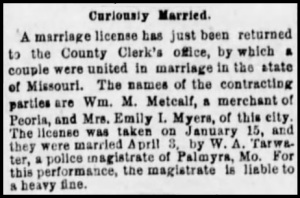 Emily was not divorced for long. In April 1884, she married William M. Metcalf, a traveling salesman from Peoria, also recently divorced. The license was issued in January 1884 in McLean County, but the marriage took place in Palmyra, Missouri, an irregularity that made the local newspaper. Who knows why they married in Missouri? Palmyra is 80 miles due west of Jacksonville, just across the Mississippi River. Maybe William or Emily had family there.  Emily’s father was still alive then, and perhaps they stopped in Jacksonville after they wed so William could meet his father-in-law.  (Palmer died just two years later, in October 1886.) In any case, it was curious, as was the length of time between the issuance of the license in January and the marriage in April.

I do not know where Emily and William made their home after they were married.  By 1884, Andrew was living in Peoria, and despite the award of custody to Emily, the boys soon followed him there.  Minnie must have come at some point, too, because in 1887 she married a Peoria native, John Wiesehan.  That same year, Mrs. Emily J. Metcalf—no William—is listed in the Peoria city directory as a live-in housekeeper for Mrs. Josephine Mehl, a widow with four children. The following year Emily was still keeping house, but she now lived with her sons at 1821 S. Adams. Andrew also lived at that address, in the rear quarters. The separate listing of Emily indicates that she and Andrew were not living together as husband and wife. The 1888 directory reports Emily Metcalf as a widow. Soon, however, she would quit using the Metcalf surname, which makes me wonder if William may not have died, but rather just dropped out of the picture. I have found neither a death record nor a divorce record, so that question remains for another day.

A Victorian trade card for Firmenich Manufacturing Company. Two of Mrs. Mehl’s children worked at the Firmenich factory at the foot of South Street, just a few blocks from their residence at 1910 S. Adams.

In 1889 and 1890, Emily, now using the surname Myers, ran a boarding house at 2205 S. Washington. Andrew and the boys boarded there in 1889, but by 1890 they were all living elsewhere. It’s here that things become a bit fuzzy.  As I will soon relate, it took a little help from Grandmother Emily herself to complete her story.  Apparently, in 1890, a new boarder named John McGillicuddy came through the door at 2205 S. Washington. I have not learned anything at all about Mr. McGillicuddy other than he was a foreman, and that his delightful Irish surname was often shortened to “Mack.” John and Emily would soon marry.  In 1891, John and Emily Mack lived at 320 Pecan Street, along with Albert and William. Sadly, this marriage was also short-lived. By 1892, Mrs. Emma McGillicuddy—no John—was living at 413 Liberty Street.  Later entries in the city directories list Emily as John’s widow, and I’ve found John McGillicuddy buried at St. Mary’s Cemetery in Peoria. 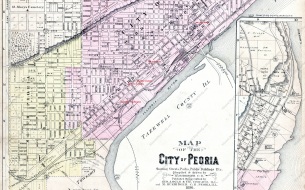 Emily was in Peoria for nearly 15 years, and for most of that time she lived downtown, a stone’s throw from the mighty Illinois River that fueled the bustling River City. 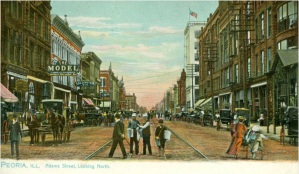 The view from Liberty Street toward Fulton. On the right is the awning of the Fey Hotel at 226-28 So. Adams. The structure, built in 1885 and converted into a hotel in 1892, would have been a part of Emily’s daily landscape during her years on Liberty.  [From the Peoria Postcards collection of the Illinois Digital Archives.]

Emily continued to live at 413 Liberty Street with her youngest son William for the next seven years.  Emily was still in Peoria in 1900, but she had moved from Liberty Street to Richwoods Township, where her daughter Minnie and family lived. (William had moved to Chicago where he worked as a bricklayer.) Minnie had four young daughters by then, including 8-year-old Emma, named after her grandmother. Emily, age 57, lived with another widow, Jennie Sterrett. The two women were close in age and both had four grown children. The census reported that Emily could speak English, but was not able to read or write. What? We know she attended school, and earlier censuses indicated that she could read and write. A sad notation in the margin explains: Emily was blind. How she lost her eyesight—illness, disease, or injury—we don’t know. Imagine how challenging her life must have become when she could no longer see. The enumerator noted that Emily was being supported by a son, probably William, who had lived with his mother all those years. Her roommate, Jennie, must have been a caregiver. 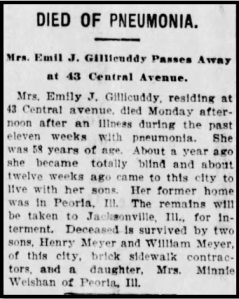 Henry and family (with Andrew), William, and Emily arrived in Oshkosh in mid-April 1901. Advertisements for Myers Brothers brick sidewalks ran nearly every day in the Oshkosh Daily Northwestern until Emily’s death in mid-xxxAugust. This particular ad ran on Friday, xxxJuly 12, 1901.

Emily J. McGillicuddy died on August 12, 1901 in Oshkosh, Winnebago County, Wisconsin.  She was 58 years old. According to the Oshkosh Daily Northwestern, Emily had moved from Peoria to Oshkosh twelve weeks prior her death to live with her sons, Henry and William. Approximately one week after Emily arrived in Oshkosh she fell ill with pneumonia, which soon took her life. The newspaper reported that Emily had become totally blind one year earlier. Emily was survived by Henry, William and Minnie. Albert disappeared from the public records around the time of John McGillicuddy’s death. I’ve yet to determine what happened to him, but Emily’s obituary confirms that Albert predeceased her. Emily was buried in Jacksonville, Illinois, completing her circle of life in the place where it began. 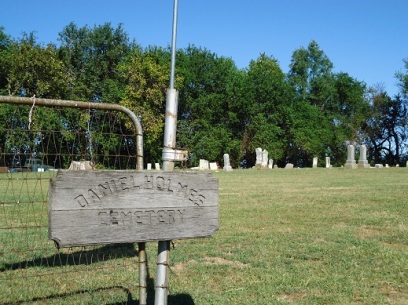 Emily’s parents are buried in the Diamond Grove Baptist Cemetery (a/k/a Daniel Holmes Cemetery). Although I have not found a record of Emily’s burial, I like to think she is here, too.

Of all my second great-grandparents, Emily’s trail has been the most elusive. Until just a few months ago, I had no information about her beyond 1880. Until just a couple of weeks ago, I still didn’t know when or where she died. As it became time for her story to appear in The Singing Oak, I became increasingly determined to find her. I searched the Internet high and low.  Nothing. I mailed off requests for record searches in Peoria, only to be further discouraged when the searches came up empty. During Christmas dinner, I related to friends how truly sad I was that Emily was lost. That night, unable to sleep, I opened my laptop, typed Emily’s father’s name into a database that I had searched countless times and ways before, and…just like magic, at this most magical time of year…there she was. Last name unrecognizable, but enough information to find her obituary and put together the rest of her story. I could hardly believe my eyes!

Thank you, Grandmother Emily, for the whisper in my ear, for your Christmas blessings bestowed, for the lovely validation of the nearness of my ancestors. You have filled my heart with joy! Rest in peace.