My dad’s maternal grandmother, Edythe Mae Siepel, is the youngest of my eight great-grandparents. She was born October 11, 1885, in Hancock County, Illinois. Edythe was the oldest of four children, two boys and two girls, born to Nathaniel Asa Siepel and Fannie Knoedler. By the time Edythe was 16, both of her younger brothers had died, Morris as an infant, and John at age 12 of diptheria. Edythe remained close to her sister Edna, nine years her junior, for her whole life.

Hancock County, where Edythe was born, borders the Mississippi River and is made up mostly of rural towns and farms. Edythe grew up on her family’s farm in eastern Hancock County, where her family had deep roots. Her parents were active members of the Methodist Church and the church was an integral part of life for Edythe and her siblings. Family was important, too. Both of Edythe’s grandmothers lived until she was in her 20s and many aunts, uncles, and cousins lived in the vicinity. The Siepel children were among the pupils of Woodville School in Hancock Township in 1900 and 1901. Their classmates included several Siepel cousins. Edythe’s future husband, Finis Nichols, and his sister Elsie, joined the class in 1901. Brother John was on the roster in 1900, but sadly, he died in 1901 and is missing from the 1901 class list.

On October 8, 1905, just before Edythe’s 21st birthday, she and Finis were married. Soon after, they moved to Galesburg, Illinois, where Finis worked for the railroad. In January 1907, Edythe and Finis welcomed their first child, Alfred Harold Nichols. Alfred died when he was just four months old. Alfred’s death surely reminded Edythe of her brother Morris, who also died as an infant, in 1892 when Edythe was 6. In December 1908, daughter Evelyn Josephine arrived. 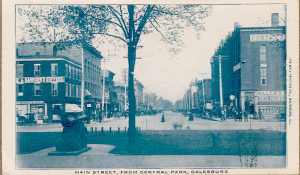 Galesburg, c. early 1900s. Edythe and Finis lived on the “other side of the tracks” from Central Park.

The 1910 U.S. Census shows the Nichols living in the rear of 498 E. Brooks Street, just a couple of blocks from the railroad line through town and close to Finis’ job. Having lived in Galesburg for nearly five years, Edythe and Finis must have become accustomed to city life, but I can imagine it took some getting used to given their rural upbringing. (Galesburg had a population of about 22,000 in 1910, while the whole of Hancock County had but 30,000 residents).

By 1912, the young Nichols family had moved to Peoria, Illinois—an even bigger city, with a population in excess of 66,000. In their first years, they lived at 504 Brotherson Street. Their family grew: In July 1912, Merle Elwin was born, followed by Charles Eldon in January 1915. In 1918, Edythe and Finis moved to 813 E. Republic Avenue. The house on Republic was nearly new, built in 1914. It was a comfortable bungalow in a nice neighborhood, just across the street from Glen Oak School. Edythe and Finis operated a home laundry in their basement for the next 25 years or so.

By the late 1930s, Edythe’s children were married and began having children of their own. Merle, his wife and three children lived with Edythe and Finis in the upstairs apartment of the Republic house until the mid-1940s. As such, Merle’s children were especially close with their grandparents.

Finis died in March 1949, when Edythe was 63 years old. Some years later, granddaughter Judy and her family bought the Republic house, which enabled Edythe to stay there the rest of her life. She died on November 30, 1974 at age 89. She was buried next to Finis at Swan Lake Memory Gardens in Peoria.

I remember seeing Grandma Nichols only a handful of times. What I know about her I have mostly learned from her grandchildren. Grandma Nichols was an avid churchgoer throughout her life. Like her daughter Evelyn, she held the honor of being one of the longest continuing members of the First Methodist Church in Peoria at the time of her death.

Grandma Nichols presented this bible to her grandson Don on his 12th birthday, October 2, 1949.

She was an active participant in the family laundry business during the many years it operated. Somehow I feel Grandma Nichols always kept her “country girl” sensibilities. I know she stayed closely connected with her family and appreciated her pioneer heritage. She and Grandpa Nichols attended school reunions for Woodville School and Grandma always looked forward to the annual Siepel and Knoedler family reunions in Hancock and McDonough Counties.

I was tickled to learn that she liked peanut butter and sugar sandwiches—a somewhat strange affinity that has passed down through my Dad to me! By all accounts, she was a loving mother and grandmother. Many of her photos reflect her cheerful spirit. If Grandma Nichols were alive today, I would ask her to tell me about her happiest memory so I could hear her memorable laugh!