My dad’s paternal grandfather, Henry A. Myers, was born in Hillsboro, Montgomery County, Illinois, on May 26, 1867. Henry’s parents were Andrew J. Myers and Emily J. Holmes. Great-grandfather Henry was the second of four children. His older sister Minnie was born in 1866 and his younger brothers Albert and William were born in 1869 and 1874 respectively. In 1870, Henry’s family lived in the Town of Ashland, Cass County, Illinois. The Myers family also spent time in nearby Oakford and Petersburg in Menard County, just a stone’s throw from Abraham Lincoln’s pre-presidential stomping grounds and final resting place in Springfield.
xxxxxxxxxxxxxxxxxxxxxxxxxxxxxxxxxxxxxxxxxxxxxxxxxxxxxxxxxxxxxxxxxxxxxxxxxxxx
By 1880, the family had moved to Bloomington, Illinois (pop. 17,180). Although Henry was just 12, his occupation was listed as cooper in the 1880 census, as was his father’s. Henry was shown to have attended school as well. A cooper crafted casks, barrels, buckets, tubs, butter churns, and other containers. In 1884, when Henry was 17, he and his father lived in Peoria, Illinois, and worked their trade for the cooperage of William Hughes, which employed about thirty men and manufactured every kind of barrel that could be made out of elm and oak. (Eventually the rest of the family also came to Peoria, although some mystery remains about Henry’s mother, Emily.)

Henry had some schooling and could read and write. This is his signature on his marriage license, Oct. 1889

Henry married Lillie Caroline Herpst on October 17, 1889 in Litchfield, Montgomery County, Illinois. They settled in Peoria. Their daughter Minnie was born in 1891 and daughter Phrona in 1893. Henry is listed in the 1893 Peoria City Directory. He was still working as a cooper and lived on Garden Street. However, Henry and his father were not listed in the Peoria directories and city censuses from 1894 through 1901. It took some digging, but I finally found the family (Henry’s father Andrew included) in Red Rock Township, Noble County, Oklahoma in the 1900 U.S. Census. Whaaat? I discovered that Noble County was part of the Cherokee Strip land run of 1893. If you are fascinated by crazy historical events, read more here. The 1900 Census listed Henry’s occupation as farmer and indicated that he rented the farm he worked. Apparently Henry was one of the thousands of disappointed landseekers who were not successful in staking a claim. xxxxxxxxxxxxxxxxxxxxxxxxxxxxxxxxxxxxxxxxxxxxxxxxxxxxxxxxxxxxxxxxxxxxxxxxxx

By 1902, the family had moved back to Peoria, where Henry would live for the rest of his life. He and Lillie had two more children, Hattie in 1903 and Henry, Jr. in 1908. Henry’s father Andrew lived off and on with Henry and his family until Andrew’s death in 1905. After returning to Peoria, Henry started a concrete contracting business. In the early years, he used a team of horses to haul his cement mixer to jobsites around town. Henry, Jr. (my Grandpa Hank), would follow in his father’s footsteps, as would my father and brother—that makes four generations of strong-willed (and maybe a little bit hard-headed) Myers men who learned a valuable trade from their fathers! xxxxxxxxxxxxxxxxxxxxxxxxxxxxxxxxxxxxxxx 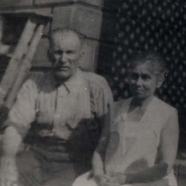 Tell me what questions you would have for Great-grandfather Henry!