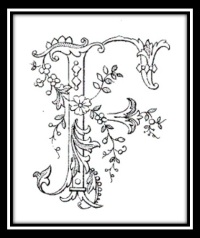 Julia Ann Foster was born on December 30, 1863, in Floyd County, Virginia, the last-born of my sixteen second great-grandparents. Julia was the daughter of William Foster and Orpha (pronounced Orpa) Jones, the third of four children. The first two Foster children were born in 1849 (Mary Jane) and 1851 (Asa). Julia was born twelve years after Asa. She and her younger brother George (born in 1867) were like a second family to their parents. It would be interesting to know the circumstances! 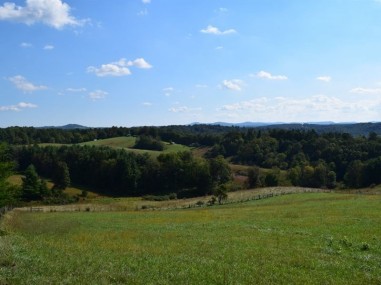 The beautiful rolling hills and farmland of Floyd County, where Julia lived all the days of her life.

Julia was born during the Civil War, a divisive time in Floyd County. A majority of citizens of the county were Confederate sympathizers, but there were active Unionists in the County and many more who simply had little enthusiasm about the cause, particularly as the war dragged on. In an 1872 affidavit filed in support of a neighbor’s claim for post-war reparations, Julia’s father William claimed that he was a Union man throughout the War. Whether or not that was true, William—who at the time of the secession vote was serving as steward of the county poor house, an elected position—was not among those who rushed to volunteer. An 1861 letter in the Virginia State Archives details William’s offer of $100 to be let out of Confederate service due to “habits” that made him “very unfit for duty.” I don’t know what William’s “habits” might have been, but I haven’t found any military record for him and, given the timing of Julia’s birth, I suspect that he was granted an exemption from service.

Julia first appeared in the public records in the 1870 U.S. Census, when she was 6 years old. The Foster family lived on a farm in Little River Township in Floyd County, just east of Floyd. Julia’s father owned the farm, and his occupation was “farmer.” (William was no longer the steward of the county poor house, having been succeeded in that position by his neighbor, Edmund Swinney. The exact location of the Floyd County poor house is not known, but it was most likely on what is now Poor Farm Road in the Little River district, the same area in which the Foster farm was located.) Julia’s older sister, Mary Jane, had married and lived on a farm adjacent to the Fosters.

In 1875 William died, leaving his son Asa to run the Foster farm. Four years later, on October 12, 1879, Julia married 26-year-old Tazwell Howard Cannaday. She was 15 years old. The same year that Tazwell and Julia married, Tazwell’s father died. In the 1880 census, Tazwell and his young bride lived with Tazwell’s mother and his four youngest siblings. Tazwell was head of household and owned the farm.  In a local directory, he was listed as one of the principal farmers in Pizarro (a community near Little River), as was Julia’s brother, Asa. Julia’s father had been a minister in the M.E. Church in North Floyd, and Julia and Tazwell, along with Julia’s siblings, were some of the original members of two early Methodist congregations that later combined to form the still-existing Stonewall Church. 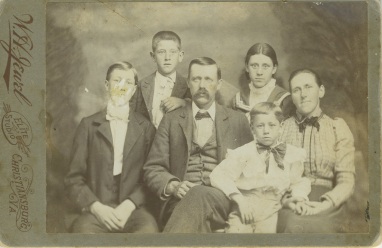 Julia and her family (l to r): Edward, Frank, Tazwell, Linnie, Asa, Julia. Asa appears to be 4 or 5 years old, so this portrait was probably taken c. 1892-93 (after Annie’s death, but before William Foster was born).

Some time around the turn of the century, the Cannadays moved from Pizarro to Rose Hill, a historic farm originally owned by Colonel Jacob Helms (b. 1790, d. 1835), who represented Floyd County in the Virginia House of Delegates. Tazwell and Julia would live at Rose Hill for the rest of their lives.

At the time of the 1900 census, Julia’s mother was living with the Cannadays, who now numbered seven. Her presence was surely appreciated as Julia and Tazwell welcomed two more children, Iva in 1901 and Kate in 1905. Julia had her first child at age 17; she was 41 years old when Kate was born. Edward was closer in age to his mother than to his two youngest sisters!

Linnie Cannaday was married at Rose Hill in October 1908, “surrounded by quite a large number of very dear friends and family.” This gathering may have been part of Linnie’s pre-wedding festivities. I believe Linnie is at the far right, standing, with white dress and long braid. Whether or not this photo was taken at Rose Hill, I can imagine Rose Hill looking like this: ornate Victorian wallpaper, tall baseboards, soaring windows, and pictures hanging from picture rails.

One by one, Julia’s children began to leave home to make their own lives. Edward and Frank left Virginia, settling in Illinois and Pennsylvania, respectively. Asa moved to Roanoke. Linnie married and lived with her husband in Floyd. In 1910, only William, Iva, and Kate were still at home. Julia became a grandmother for the first time in 1908, with the birth of Edward’s son, my grandfather Edward. 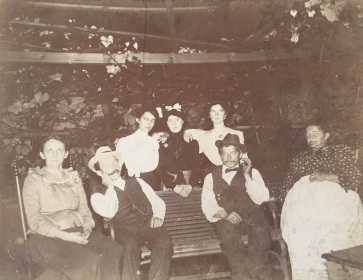 This photo was taken during a visit to Floyd by Edward and Martha, c. 1907. Martha is standing at left, and I believe Linnie is one of the other two young women standing next to her. Tazwell is seated on the bench, left, and Julia is next to him in the high-backed chair. The others are unknown.

The house at Rose Hill must have seemed ever bigger, and life ever quieter, as the years passed. By 1920, William Foster had followed his brother Frank to Pennsylvania. Iva married in 1925 and moved to Roanoke. I wonder if Julia and Tazwell were disappointed that none of their sons or sons-in-law carried on with the farm? How often did the Cannaday children visit their parents? In the case of my great-grandfather Edward, he wrote of a three-month visit to Floyd in 1905 after he got out of the service, and there are a handful of photographs of one or two visits to Floyd (from Illinois) not long after he married in 1907. There may have been later trips “home” that were not documented with photos, but if so, I feel sure they were few and far between. 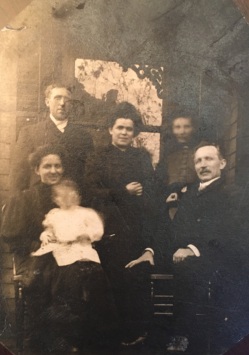 This photo was taken during another visit to Floyd by Edward and Martha, c. 1909-10. Edward and Martha are at the far left. Martha is probably holding their son, Edward (b. June 1908). Tazwell is seated at right, and Julia is most likely  standing behind him. The identity of the woman in the middle is unknown.

The census tells us that the Cannadays’ 10-year-old grandson Frank (son of Frank) was living with them at Rose Hill in 1930. Frank’s mother had died soon after he was born, and it’s possible that little Frank had been living with his grandparents for several years. Julia and Tazwell lost their oldest son Edward to suicide in 1930. That must have been a shock, even if they were aware of Edward’s struggles in the preceding years. Tazwell died two years later, two days before Christmas 1932. Daughter Kate still lived at home and was surely a help and comfort to Julia during these challenging times. (Kate remained single and lived at home until after her mother died.)

Julia died on February 28, 1939, at the age of 75. She is buried next to Tazwell in the burial ground at Rose Hill. She was survived by six of her eight children, twelve grandchildren, and one great-grandchild (my mom), who Julia did not have the opportunity to meet.

As with many of the grandmothers in our family history, Julia is an enigma. She is largely absent from the public records and often in the background, or completely absent, from family photographs. This much we do know: Julia was a child bride who stepped into the role of wife and mother, caretaker of others, at a tender age. She was a farm girl from the day she was born to the day she died, a farmer’s daughter and a farmer’s wife. She was a minister’s daughter, too, and a faithful churchgoer throughout her days. She lived her whole life in the peaceful surroundings of the Blue Ridge Mountains, surrounded by a large extended family, in a close-knit community of friends and neighbors. I can imagine that Julia was well-loved. In the few photographs I have seen of Julia, she strikes me as a strong and steadfast presence, able to weather life’s storms, disappointments, and tragedies.