Ernst Heinrich Tornedde was born July 29, 1855, in the tiny village of Brunsen in the Braunschweig (Brunswick) region of Lower Saxony in present-day Germany. The identity of Ernst’s parents is unknown. However a DNA match points to Johann Heinrich Christoph Tornedde and Engel Hedwig Binnewies Tornedde, a married couple who lived their entire lives in Brunsen in the late 1700s and early 1800s.  I have yet to sort out their exact relationship to Ernst, but I am excited for this clue about his lineage.  Other clues have surfaced about Ernst’s family, too, mostly through a collection of old letters that recently came to light. The letters, translated from the Gothic script in which they were written, reveal that Ernst had a step-brother named Heinrich and that his parents were still living well into the 1890s.

The Port of Hamburg lies on the River Elbe in Hamburg, Germany, 68 miles from its mouth on the North Sea. From 1850 to 1934 police recorded information about millions of European emigrants departing from this port, including our own Ernst H. Tornedde.

Little is known of Ernst’s early life. At some point, he left rural Braunschweig and moved north to Harburg, on the southern shores of the river Elbe. Harburg is now a borough of the port city Hamburg, where on June 8, 1881, just shy of his 26th birthday, Ernst boarded the S.S. Frisia, bound for New York. 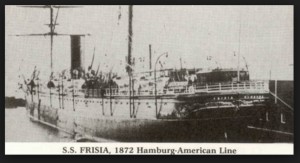 The Frisia, owned by the Hamburg-America Line, brought nearly 47,000 immigrants to the United States between 1872 and 1885.

Upon reaching America, Ernst made his way to Steubenville, Ohio, where his sister Caroline had immigrated some years earlier. Ernst was by trade an iron molder and would have easily found employment in one of the many iron or rolling mills in Jefferson County.

Sometime prior to his departure for America—we don’t know when—Ernst met Wilhelmina Bremer Mainzer, a widow with a young daughter, who also lived and worked in Harburg. Meanwhile, in Ohio, the Bremer and Tornedde families had become connected by marriage when Ernst’s widowed sister Caroline married Wilhelmina’s brother Wilhelm in 1880. (It surely seems possible that the two families had known one another for some time.) By early 1882, Wilhelmina was making plans to follow Ernst to Ohio.

Wilhelmina and Helene set sail from Hamburg on May 14, 1882 and arrived in Steubenville the first week in June. Ernst Tornedde and Mrs. Minna Mainzer were married on August 29, 1882, in the Evangelical Lutheran Church. The Torneddes welcomed their first child, Martha, in April 1884. Two years later, the family would pull up stakes and move to Peoria, Illinois, a booming industrial city with better economic opportunities.

Ernst traveled to Peoria a month in advance of Minna to secure work and suitable housing. Over the course of the next month he wrote weekly, affectionate letters in German to Minna describing his job, housing prospects, the cost of living, and the city. He never failed to say how much he missed his family and always signed off with sweet sentiments: “Many thousand kisses to you, dear Minna, Helene, and darling baby, from your loving Papa.” Ernst’s letters offer interesting tidbits about daily life in Peoria in the 1880s. He earned $2.50 a day at the foundry where he worked and paid $4.25 per week for a room plus meals. He reported that a nice apartment could be had for $6 or $7 a week and that the price of coal was the same as in Steubenville, 6 to 7 cents a bushel. He informed Minna that Peter Pehl (another German-born iron molder whose family Ernst had briefly stayed with on his arrival in Peoria) purchased a lot for $200 and was building a house for $900. He noted that you could buy meat and almost everything else on Sunday. Ernst’s letters may have involved a bit of salesmanship, too, to allay any anxieties Minna might have had: “Peoria is a pretty town…The whole city is lit up with electric lights, there are several horsedrawn streetcars, 13 trains come through, there is a museum and a public library, both free of charge, there are several theaters with performances on Sundays…”

The Union Depot in Peoria opened in 1882, at the foot of State Street. The depot was active for nearly 70 years. The building (then used as a post office) was destroyed by fire in 1961.

As the time drew near for Minna’s departure, Ernst included specific instructions about things to pack and the train ride, and assured Minna that he would be waiting at the station. By this time, Minna was six months pregnant. I wonder what she thought when she read, “Don’t sell the little stove; you can put it in a wooden crate, except for the pipes. Take it along the day you start out, also some bedding and china packed in straw, which we can use here. I’ll leave all the rest of it up to you; you’ll be busy.” Somehow Minna managed the trip with Helene and Martha in tow (and perhaps the little stove!), arriving in Peoria in April of 1886. Three months later, in August, son Ernest was born.

The Torneddes settled in to Peoria life. Ernst was naturalized as a U.S. citizen in November 1887. He worked steadily as an iron molder and soon became a foreman for O’Rorke & Company, which primarily made castings for agricultural implements. By 1891, Ernst was able to buy his family a home, located at 711 Johnson. (Peter Pehl lived across the street at 708 Johnson, on the lot he bought for $200. I wonder if the Torneddes built their home too?) In the late 1890s, Ernst bought a corner grocery on Steubenville, just a few blocks from Johnson, although he did not retire from foundry work for another twelve years or so.

Wilhelmina died unexpectedly on March 29, 1907, after a brief illness. With his children grown, this must have been a sad and lonely time for Ernst, who so loved his family life. A year and a half later, Ernst sailed to Germany for a month-long visit. When he returned to Peoria, he brought with him a young German bride, Martha Seitz Tornedde. Ernst and Martha made their home at 132 Steubenville, in back of the grocery. Daughter Martha, now married, continued to live at the family home on Johnson. Son Ernest went back and forth between the Steubenville and Johnson addresses.

In July 1910, Ernst and Martha welcomed a daughter, Hilde. Ernst’s daughter Martha never warmed to her stepmother (who was just three years older than Martha), or to her half-sister Hilde, who was close in age to Martha’s son Edward. I can imagine that Martha’s rebuff was a source of sorrow for Ernst. But by all accounts, Ernst was as devoted to his second family as he was to his first, and their household was a happy one.

Ernst died on September 15, 1934 in Peoria, at age 79. He was survived by his wife Martha, daughters Martha and Hilde, and three grandsons. His son Ernest died the previous year.

A person’s “footprint” here on Earth—the documents, photos, letters, and family lore they leave behind—can help us understand who they were and how they lived their life. In Ernst’s case, it is clear that he worked hard to provide financial comfort for his family. Like many German immigrants of his era, he was industrious and thrifty, a skilled tradesman who owned his own home and a business. His children were educated and well-dressed. In later years he had the means to send his wife Martha and daughter Hilde on a trip to Germany to visit Martha’s family.  But the most lasting impression I have is hearing Ernst’s voice in his letters to Minna—reassuring, optimistic, warm, loving, romantic—the voice of a dear, sweet man I would like to have known.